Head turner: As it has been already mentioned, the display is attached to the base through a pivoting mechanism that allows the display to rotate 180 degrees. This can be performed by depressing a release button housed centrally above the keyboard’s keys, which offers just the right level of resistance. At first, the action might feel precarious, as if the display could snap off if too much pressure is being applied. After performing the action a few times, however, it becomes clear that this was not the case, with the pivot proving solid and steadfast with a fluid action. Far from a novelty, the rotating action lets you easily share content displayed on the screen with a friend or colleague from literally any angle. Its performance is being aided by a nippy 128GB SSD, which ensures that the machine boots and shuts down in a little over 10 seconds. Document warriors will be pleased to learn that the T904’s keyboard is up to the job of lengthy writing sessions. It’s accompanied by a pleasingly responsive and very roomy click pad. 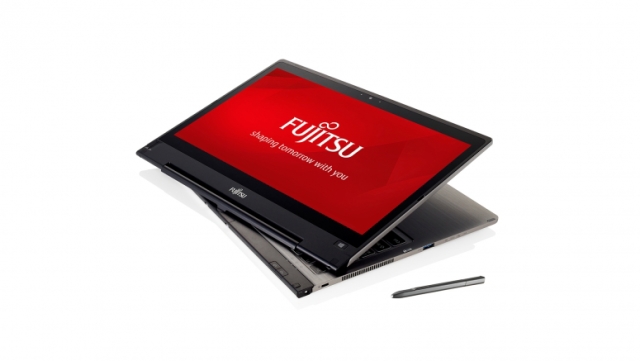 Rotating it 75% puts the machine in an L-like shape that lets you interact with the touch screen without the keyboard getting in the way. Rotating the display 180 degrees and folding it over allows you to handle the Ultra book as you would a regular tablet. It works well, but as with Lenovo’s ThinkPad Yoga and even the company’s startlingly thin Yoga 3 Pro, it is uncomfortably hefty when held in this manner for long periods, and there’s a tendency to accidentally press the keyboard keys on the underside with the hand holding the device.

On the connectivity front, the T904 comes with a broad range of options, including two USB 3.0 ports, HDMI, audio/line-out and headphone jacks, a docking connector for a Port Replicator, a Kensington Lock slot, Smart Card reader and Memory card slot. Fujitsu is aiming the T904 at road warriors as its communication options can benefit those who are regularly on the move. A SIM card slot means that a 3G/UMTS or 4G/LTE SIM card can be inserted, allowing for on-the-go connectivity. Communication is also served via Bluetooth and Intel Wireless 802.11n Wi-Fi. When looked upon the benchmarks, incredible results were found. The T904 comprises of the 3D Mark 11. The Fire Strike: 346, Sky Diver: 1,576, Cloud Gate: 3,101 and Ice Storm: 24,627. Its battery life is extended up to 7 hours 3 minutes. Also, noticeable results came out as the Cine bench R11. It owes the CPU (Single Core) which is measured as 1.35pts and CPU (Multi Core) is measured as 2.48pts. What else do you wish to get?
The T904 can be configured with a number of Intel Core-series CPUs, ranging from Intel’s i5-4200U (3 MB cache, 1.6GHz turbo boost to 2.6GHz) all the way up to a Core i7-4600U (4MB cache, 2.1GHz turbo boost to 3.3GHz). The machine has managed to go point to point with the ThinkPad Yoga in terms of processor performance, scoring 2.48pts compared to the Yoga’s 2.49pts in Cinebench’s Multi CPU benchmark test.

Snapdeal Coupons- to Avail the Best Offers on any Product